http://www.youtube.com/watch?v=Xbhw3CwwiI4&feature=share
Posted by No Guile at 12:38 AM No comments: 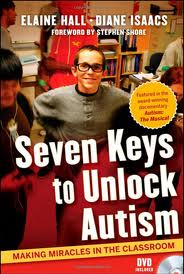 SEVEN KEYS TO UNLOCK AUTISM: Making Miracles in the Classroom
By Elaine Hall and Diane Isaacs
“Groundbreaking” and “miraculous” are two words that can be used to describe the founders of The Miracle Project’s newest book SEVEN KEYS TO UNLOCK AUTISM (Jossey-Bass, an imprint of Wiley; November 2011; $18.95; Paper; ISBN: 978-0-470-64409-6), which takes readers through seven integrated steps to best access and make meaningful connections with children with autism spectrum disorders – one of the most challenging aspects of the disease.  It’s based on the acclaimed author’s approach (Elaine Hall and Diane Issacs) that was featured in the Emmy award-winning documentary Autism: The Musical.
Authors Hall and Issacs believe that ALL children can grow through creative expression, and it was this belief that not only inspired The Miracle Project (a multi-platform socialization program that enables children and teens with autism and other special needs to express themselves through all creative arts) but also the SEVEN KEYS TO UNLOCK AUTISM.  This book shows teachers and parents how to bring out the best in kids with autism, nurturing their self-expression and boosting their social skills.
The book’s journey began in 2004 when Hall founded The Miracle Project, bringing to life the visionary goal of providing a loving and accepting environment that celebrates the unique and often unrecognized ability of young people with autism by guiding them through creative workshops and artistic programs.  From there, the Project skyrocketed, going from program, to inspiring a musical, to the Tribeca Film Festival and then finally capturing two Emmys and becoming an internationally acclaimed program that uplifts thousands of children with autism.
The “SEVEN KEYS” came to life when Hall had to train a staff that had very little experience working with children who had autism.  She realized she needed to develop a method to help her staff connect with the children, and thus the SEVEN KEYS were born.  Throughout the years, Hall and Issacs have watched staff member after staff member develop the skills that allowed them to create meaningful relationships with all the children in the program, as well as benefit from having these relationships in their lives – growing in compassion and understanding.” (Book Press Release)
This should be required reading for all teachers. Each of the seven keys are simple to add to not only the classroom but the home. The authors hold the idea of stop trying to change the child and let them lead.  When you enter their way of seeing and experiencing the world you can begin to understand. One you understand you can implement ideas not only to help them but to make them part of the group.
An example in the book is the kid who cannot sit still do to sensory issues. Not only does the teacher give him an exercise ball to sit on she rather than placing him at the back of the room places him at the front. He now is part of the group and as he begins to participate the movements begin to slow down, while they never stop the exercise ball allows him to bounce and move as needed without disrupting anyone.
Another great example from the book was concerning a child who does not speak. Find ways to make them part of the group ask questions that require everyone to raise their hands, such as who agrees with Sally’s answer. This allows the nonverbal child to be a full participant in classroom activities.
For the home follow the child’s lead. Really think about what is important. Is it really important to improve Johnny’s handwriting when he could use a computer? Are the therapy goals something the child wants or something the parent wants? Allow them to be part of IEP’s and other meetings concerning them.
Above all the keys come down to listening. Each key has a section describing the key, a section explain the stop, and a section explaining the unlock. The keys are really about opening the teachers mind to a different way of doing things. In the process of opening your own mind to a new way of thinking the connection will come.
For more information visit:  http://www.themiracleproject.org/who-we-are/
Posted by No Guile at 11:16 AM No comments: 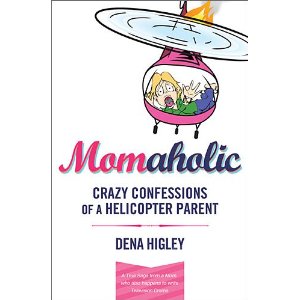 Momaholic  by Dena Higley
Every mom has felt the need to be perfect.
MOMAHOLIC is one woman’s private, dramatic, and often comical invitation to peek inside a time in her life when everything fell apart, causing her to take an honest look at what she was doing right and what she’d been doing terribly wrong. With this discovery, her wacky family’s season of becoming unraveled found a new glue that would re-bond her family and unite them in a deeper and more functional way than ever before.
The real life characters: A MOM who is literally the head writer of a network soap opera … at work and at home; A HUSBAND who can’t help but scratch his head in frustration as his family’s troubles seem to spiral out of his control; an autistic SON; a popular DAUGHTER who is suddenly pregnant; an ADOPTED DAUGHTER pulled from the jungles of Vietnam; and an ADOPTED SON rescued from the streets of Ethiopia.
This is a story showing the speed with which a “normal” family can fall apart. With the family running around as the tornado sirens roared warnings to take cover, mom becomes the biggest mess of all and ends up finding a whole new freedom for her soul. www.netgalley.com
Dena who was a head writer for Days of our lives is also a self-admitted helicopter mom. Her story opens with the crash of her helicopter. This is her story. What happens when someone takes on too much and stops taking care of themselves.
By far Dena does not see herself as a martyr, who gave everything up for her children and in return had a breakdown.  She sees it differently. While she could say having an autistic son, a pregnant daughter, another disabled daughter, and a son from the streets of Ethiopia was the cause of her breakdown she does not. Actually she very openly says they had nothing to do with it, that this breakdown was all on her. Her children play a minor role in this story, yes she talks about them. How her oldest has autism and is a college student and some of the things he has done. Her other son is running a soda ring at school, one daughter is pregnant, and the other has just had another surgery.
Through the course of her story she learns that even if she says no the PTA will still function, the school will not close, and life will continue.  Not only was she a helicopter mom she became a helicopter grandma as well trying to be her grandchild’s second mom. Once she stepped back and took a break, she could see her grandchild did not need a second mom but a grandma. As soon as she realized this she could stop trying to raise her grandchild and enjoy being a grandma.
This book will be released on May 1, 2012. You can put it on preorder at many major bookstores.
Posted by No Guile at 10:58 AM No comments:

In our house we have 2 kids with autism. Roger has a official dx, while Lucy is skirting around the edges with what the doctor said is borderline autism. I'm still not sure what that is. All I know is what they say and what they say is she has many traits of autism but not enough for a official dx.

We tend to talk about Roger more because well he needs more supports than his sister at this time. When she was 3 Lucy needed more supports. She is the one who had the IEP, who had speech, who needed the most at the time. It's always changing. She also does not have as many dx's.

She no longer needs speech but we went through 2 intensive years of it through the school district just to get her to talk. She didn't talk until she was almost 5.

He can read and remember just about anything forever. She forgets a lot and may be dyslexic.

Her little tics yes she has them are not as pronounced as Rogers mainly because she does not have a movement disorder that in all actuality makes his worse.

She has more social skills than her brother but she is still lacking in that department.

She is also a girl and girls present differently.

She has to have everything perfect, everything in it's place and homework must be perfect or she will get upset.

I'm not writing this to say she is better than or anything like that just that they are very different. I'm sure I can go on and on but I don't want to compare them. They both have their strengths and weaknesses as all people do. There is no look to autism, no set of behaviors that are exact, it is a spectrum. With that people will fall in different areas, it does not mean one is more autistic than the other they just present differently and have different challenges.
Posted by No Guile at 10:47 AM No comments: